The Hunter Melanoma Foundation was chosen to be the charity partner for the crowdfunding initiative for the 2020 Surfest Women’s Pro.

This year, the 96 organisations that contribute the funds to ensure that the Women’s Pro remains a key event in the Surfest calendar nominated local charities for the partnership – Hunter Melanoma Foundation was drawn from the hat. The Foundation was the beneficiary of a silent auction that was held as part of the crowdfunders’ cocktail party that kicked off Surfest finals week on Monday 2 March.

Foundation Executive Officer, Claudia Tolhurst said that the charity which was created in the Hunter in 1986 was incredibly honoured to be part of such an amazing community initiative.

“The Foundation congratulates the 96 organisations in their commitment to supporting local events and particularly womens’ sport. We are particularly excited to hear that the collective efforts have also enabled Surfest to provide parity of prize money to the women competing at Merewether Beach,” she said.

“While we are excited about the ability to raise some dollars to assist people who are undergoing treatment for melanoma, the fit with a professional surfing event provides the Foundation an opportunity to raise awareness of this deadly disease,” she said.

Hunter Melanoma Foundation’s provides education and awareness about prevention and early detection.  It raises funds to support these programs and to fund initiatives that assist patients with melanoma and their families as well as melanoma research in the Hunter Region.

Many of the crowdfunding organisations donated prizes that were auctioned on the night. All proceeds raised from the night will be donated directly to the Foundation and used specifically on programs aimed at educating young people about sun-smart behaviour.

The Hunter Melanoma Foundation launched its ‘Skin in the Game’ initiative in 2019 which targets sporting teams and events to get involved with programs that educate participants and spectators about the risks of melanoma while providing sun smart and skin check tips.

“The partnership, even though it was randomly drawn from a barrel, was such a logical fit for the Foundation and Surfest event. We were incredibly grateful for the opportunity to be part of this incredible local collaboration,” Claudia said.

On the night Claudia Tolhurst attended the Cocktail event with Newcastle Jets midfielder, Pat Langlois, who became a Foundation Ambassador after participating in a free skin check as part of the ‘Skin in the Game’ initiative at a Jets training session. Pat recognised the importance of awareness after both his dad and grandfather had skin spots removed.

COVID-19 | What You Should Know 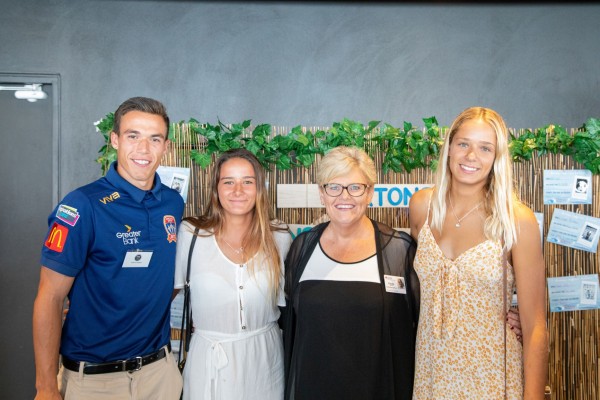